I’ve only been lifting free weights for the past five years, but  as an outsider to gym culture, I hope my list will be helpful to those neophytes who find that they have to share small workout facilities with people they would not normally associate. Sometimes it can be intimidating to be a woman in a male dominated place; there are lots of passive- aggressive ways that men use to make sure that you are aware that you have intruded on their sacred space and make you uncomfortable. I have provided some ways to help you fend them off.

In my experience, almost everyone in the gym appears to be more sexy, and interesting if they don’t talk too much. This is a unisex thing; I personally prefer to let my imagination fill in the gaps. I spent three years of watching a very fit man- who never, ever spoke, work out with these strange arm coverings. I imagined that it was some strange cure from the old country and that he spoke no English. When we finally did chat, I discovered that he had a very strong New York accent and the coverings were old sweat socks to soak up arm sweat.

After all, the gym is a place to concentrate on our bodies, improve our body image and feel sexy. There is nothing worse than learning that the cutie that you thought was stoic and tough, gossips as much as the mothers on their way to Zumba class. I know that this ALSO means that I WOULD DO BETTER TO STICK MY EARPHONES IN MY EARS AND SHUT UP.

PS: In the event of very hurt feelings or burned bridges, there are a lot of gyms out there- in fact- it might be wise to join more than one…. 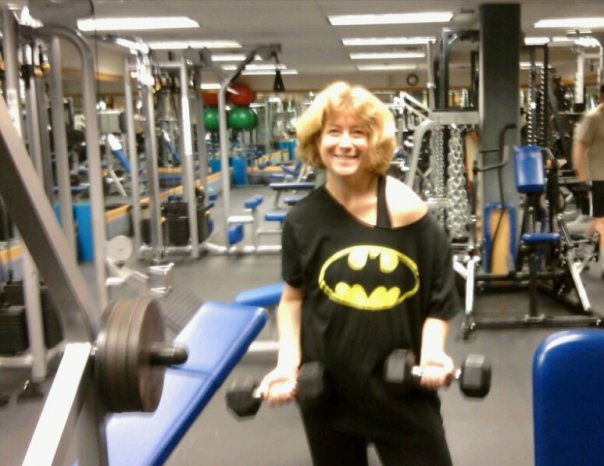 Me before cell phone cameras were banned at gym.

This was also published on Open Salon under Snarkychaser