Seven years ago I bought some ancient bronze Roman rings from a little antique shop in Red Bank, NJ. The rings had been dug up in Bulgaria and were dated 1st century. I love these rings and wear them all the time. They have a green patina and are so worn that it looks as if I am wearing something that my plumber might have pulled out of our house.

Most of the women in my suburb have big diamonds on their fingers, and love to tell the stories about them to anyone who asks. No one has ever asked me about me about my rings. Perhaps they believe that I am wearing my grandfather’s rusted Boy Scout ring never imaging the history that my rings have seen.  Most likely the ring just isn’t of interest to anyone except me. Each ring only cost $20… certainly not a month’s salary. In fact, I gave a lot of them away; I thought they were so neat.

I have always had a sneaking suspicion that perhaps they were not really Ancient Roman rings. This suspicion was heightened when I came across copper rings in an Indian import store that bore many of the same markings.

I was never able to find much information on the rings of Ancient Rome or of the Roman’s occupation in Bulgaria. I did once read that Roman men used signet rings as a means of identification on their written correspondence and that they wore their rings at the knuckle. They were fairly prevalent with the middle class so it might explain why they were able to find so many.

When I went to Rome and saw rings just like mine in the Vatican Museum, I reaffirmed to myself that my rings were real.  During the years, would go back to the antique store and was even more gratified to see that the vendor did not carry any more ancient Roman rings. He did not have them until this past weekend. 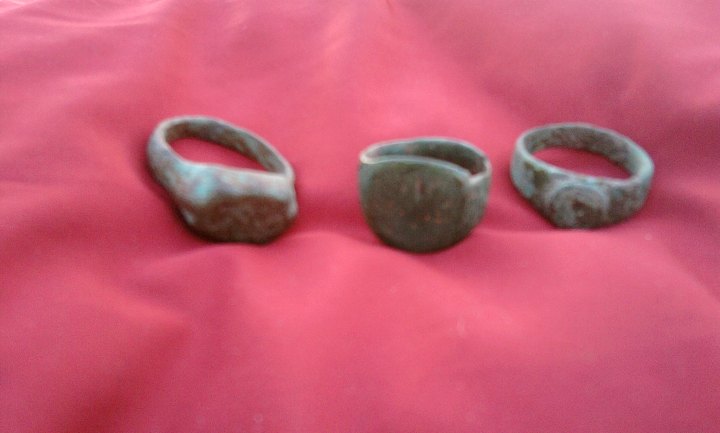 Mine are much nicer but he had some other interesting things.

I am seriously considering going back to get some coal from the Titanic.